Recent news headlines regarding the difficult Russia-Ukraine war are certainly difficult to fathom. For investors, these headlines continue to increase anxiety, particularly as it relates to increasing uncertainty in the markets and volatile oil prices.

As of April 6th, oil futures rose from the previous day as U.S. and other nations set to announce further sanctions to combat Russia's invasion of Ukraine. As of April 6th, the price of Brent crude, the international benchmark, was up 1% to $107.73 a barrel as of 5:30 am ET and West Texas Intermediate gained 1.5% to $103.531.

As we’ve seen over the past weeks, the price of oil has fluctuated below $100 a barrel, but also spiked far beyond that threshold. Without a doubt, Russia’s invasion of Ukraine has caused a global supply shock. Russia is one of the biggest oil producers in the world. With its attack on Ukraine intensifying, market participants (oil traders, shippers, and financiers) have turned away from Russian oil, causing a global shortage2.

However, this isn’t the first time in history that we’ve seen geopolitical events impact oil supply and prices at a global level. To illustrate this, we looked at three case studies of geopolitical events that impacted the price of oil and the economy.

•    Arab Oil Embargo & Oil Prices Quadruple (early 1970’s)3: During the Arab-Israeli war, Arab members of OPEC imposed an oil embargo against the US in retaliation for the US decision to support the Israeli army. The embargo caused devastation in the American economy and led to a surge in oil prices from $2.90 a barrel before the embargo to $11.65 a barrel in January 19744. Though peace talks led by President Nixon failed to materialize, the crisis came to an end when OPEC nations ended the embargo in March 1974, though the higher prices remained until December 1974.

•    Iraq Invades Kuwait (1990)5: When Iraq began amassing forces on its border with Kuwait and then attacked, global markets responded swiftly. The First Gulf War saw oil prices rise to a then all-time high of $41.90 a barrel in October. However, the gains are short-lived. US-led forces enter the conflict and secure the oilfields of Saudi Arabia, calming markets. In total, the spike in oil prices had subsided after nine months of the attack.

•    Iraq War Begins (2003)6: The US-led invasion of Iraq removes 2.5 million barrels of oil from the global market and increases uncertainty in the Middle East, a region of the world that is home to the world’s biggest oil reserves. Inventories were already low in the US and other countries when the war started, and demand was increasing. Once again, an oil shock heavily impacts the US and global economy. The average price of gasoline in the US was above $1.5 a gallon in the first year of the war (2003) and above $2 in 2005. By the time George W. Bush left office in 2008, the average price of oil was $3.27 a gallon and the peak in June was $4.11 (adjusting for inflation, that would be $5 per gallon today)7. The war concludes in 2011. 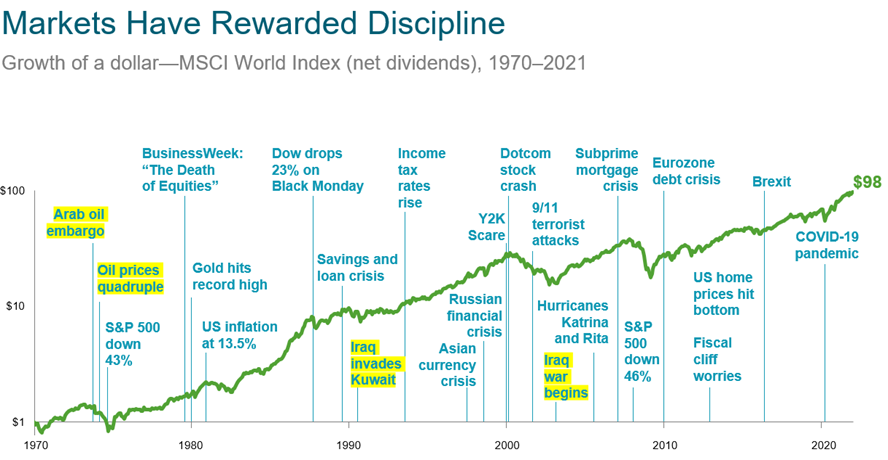 In US dollars. MSCI data © MSCI 2022, all rights reserved. Indices are not available for direct investment. Their performance does not reflect the expenses associated with the management of an actual portfolio. Past performance is no guarantee of future results.

In David Booth’s own words: Take a look at every recession we’ve been able to measure. How did the stock market respond? What can we learn from the past that is predictive of this moment? The answer is almost nothing.

Many of the headlines we’ll read over the next few weeks and months will claim that “it’s different this time”. And they’re right, every financial crisis is different and has its own cause. Crises keep happening, as illustrated well by the graph above, because they are not predictable. People often forget to remember that if downturns in the market were predictable, things would self-correct. That is the forward-looking nature of markets.

We can’t control crises, but we can control our response to them. As illustrated in the graph above, a dollar invested in the MSCI World Index (net div.)8 in 1970, long before the numerous crises we’ve endured over the past five decades, would have grown to $98 by 2021. This growth would have been achieved by simply staying invested and not reacting rashly to relatively short-term impacts on the market. In other words, you don’t have to predict financial crises, but you should be prepared for them. Understand the range of possible outcomes for your portfolio, create a plan tailored to your goals, and stay true to your investment philosophy.

The returns we expect from investing do not necessarily show up every day, every week, every month, or even every year. But the longer we stay invested, the more likely we are to capture them. So, rest assured that even when there is volatility and uncertainty, people are still buying and selling. The market is doing its job, and we believe the rewards will be there if you remain disciplined.

Dimensional Fund Advisors LP is an investment advisor registered with the Securities and Exchange Commission. Past performance is not a guarantee of future results. Indices are not available for direct investment; therefore, their performance does not reflect the expenses associated with the management of an actual portfolio.